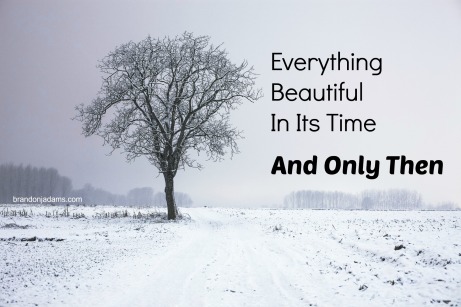 I’ll never forget that May snowstorm a few years ago.

It was only a couple inches, but with the snow sopping wet and everything in full bloom, the trees didn’t have the strength to withstand even that much. It looked like a hurricane had blown through. Branches littering the streets, trees sagging into yards and onto power lines…my mother, out for a walk, had a branch come crashing to the ground only feet away from her.

Things aren’t beautiful outside their time.

“He has made everything beautiful in its time. He has also set eternity in the human heart; yet no one can fathom what God has done from beginning to end.” (Ecclesiastes 3:11)

Or try the other side. Ever hoped guiltily for a winter that would dart unexpectedly out the door in February and leave us with an early spring? I have. A good friend once said that spring “feels hopeful.” Certainly more so than winter. I don’t enjoy the brownness of the earth in winter, the gray skies, the inability to smell anything. Some people feel more alive in the crispness of winter air, but not me. Winter is a season of dead. The long, dark nights offer depression, like I’m living on Mars. Give me one month of winter to snowboard and make Christmas look right, and then we can be done. Coming up at eleven: What my car thinks of winter – uncensored! (Why do I live in Montana again?)

And sometimes, spring indeed comes early. A sneaky glee springs within me in those years.

But it’s not beautiful outside its time.

The thing about Montana is that the whole state likes to go up in July forest fires if winter doesn’t bring enough snow to melt down and nourish the forests. The low water level in lakes and streams hurts wildlife. Crops die if they’re not protected by snow – something called “winterkill” that I didn’t learn about until I lived on the east side for a few years.

And God’s dreams for us die if they’re not watered by time.

“Let perseverance finish its work so that you may be mature and complete, not lacking anything.” (James 1:4)

Every one of us is trying to hurry God along through something. Unanswered prayer, crisis, hard work. We all have our winters. And when I’m bare-white-knuckling my spiritual steering wheel just to keep from skidding off the straight and narrow – well, hang the seasons, I just want spring to come. C’mon, God!

I have a sense it’s not going to work.

A season must accomplish its purpose.

I remember the fall of 2007, when the fires were so numerous and the smoke was so thick that hiking in the nearby Swan Range was a raspy chore and you couldn’t see further than two blocks downtown. I don’t want that. It’s the old “pay now or pay later” decision. God offers to irrigate my character and preserve me for great things later.

And it’s not really an offer, honestly, as we’ve all found out. Sometimes he lets us mess up. But sometimes, we’re given no say in the matter.

“A saint’s life is in the hands of God like a bow and arrow in the hands of an archer. God is aiming at something the saint cannot see, and He stretches and strains, and every now and again the saint says — ‘I cannot stand any more.’ God does not heed, He goes on stretching till His purpose is in sight, then He lets fly.” (Oswald Chambers)

It’s October, and I am sitting here watching the snow line creep back down the mountains again. The sun is going into hibernation. Urgh. I know God in his grace doesn’t begrudge me my eagerness for different things. But he’s got a spiritual water cycle that I’m really going to be grateful for later on.

Your mind is actually kinda blown by how many times you’ve heard this.

But be honest – is not your mind also blown by how many times it’s proven to be true? How the knowledge of God’s purpose in waiting sustains you in times of maddening frustration? I mean – you’re still here, aren’t you? God’s grace is still in effect for you, sustaining you, bringing you peace, isn’t it?

If not, try this:

“Restore to me the joy of your salvation and grant me a willing spirit, to sustain me.” (Psalm 51:12)

I pray this every day. I need to be sustained, to be ferried along as I wait for the greater things I long God to do in me and through me. A prayer for sustenance? There’s no season that’s wrong for that prayer. He’ll gladly grant it at any time. You’ll have to swallow your pride, perhaps; self-pity can be fun. But I tried that for years and it only calcified my soul. I’ll take peace now.

And as for the moment when God finally releases his arrow?

He doesn’t just promise appropriateness. He promises beauty in his timing. This is why I’m no longer saying that God’s timing is perfect. The phrase has grown stale from overuse. Instead, God’s timing is brilliant. Its beauty will floor us. We would not want anything else, and we will not regret a single hour of the wait once it ends.

4 thoughts on ““Everything Beautiful in Its Time” – and Only Then”