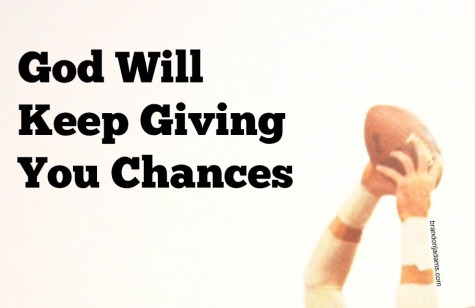 In January of 2015, Seattle Seahawks wide receiver Jermaine Kearse had probably the worst game of his life.

During the championship match to decide the participants of Super Bowl XLIX, Seahawks quarterback Wilson threw four interceptions, all of them intended for Kearse. Most of those passes themselves were accurate; two of them bounced off Kearse’s hands, and two of them he just didn’t seem to fight all that hard for. Not the kind of stat line that wins you games.

Given that this carbuncle took place during a time of frustrated prayer for me, I assumed it was an answer from God and started looking for a spiritual application.

At first, in that all-too-common stage of putting words in God’s mouth, I figured his lesson to me was something like this: “You’re Russell Wilson and I’m your coach. Stay in the game; keep fighting like Wilson did.” After all, Wilson is epic, and he’s the one in the trenches while his coach does the thinking, planning, observing, and instructing from the sidelines. Perseverance is a tool of the kingdom. Made sense.

But God broke in and reshaped my thoughts.

Yes. Of course. That was more true.

I remember seeing a sideline shot of Kearse on the sidelines during the game’s fourth quarter, after the four interceptions he’d allowed. Rarely had I seen a player look so dejected. My heart went out to him. How would I have felt if I’d reached the second-biggest game in an NFL season only to damage my team’s chances – and before such a great cloud of witnesses?

But I really needn’t wonder.

I am that Kearse. All the time.

How many times has God tossed me the ball and I’ve let my task bounce away?

How many times have I just not fought that hard for the holiness I’ve been assigned?

How many times have I let down my God?

I can imagine how I would have felt if I were in God’s position. Here’s where I admit, to my everlasting shame, that I turned my television off in disgust during the second quarter of that game. Missed most of it. I turned it off in response to Wilson’s second interception and turned it back on out of depressed curiosity in the fourth quarter – just in time to watch the last interception.

I can almost hear God’s words. Good grief. This circus is what I’m rooting for? Will you please get your act together?

But then I examine the Bible and am ambushed by the mercy of a God who refuses to turn off his television.

Peter denied Christ and was given a whopper of another chance – he was made the head of the church. How apprehensive he must have been, how conflicted with joy and worry, as he sat on the shores of the Sea of Tiberias munching fish with the risen Savior. He had denied his Savior. As far as he or anyone else knew, Peter had no reason to think his name was still written in the Book of Life (Matthew 10:33). As far as he knew, he was out of the kingdom.

But Jesus, in infinite kindness, gave him three affirmations, one for each denial (John 21:15-17), there at the Sea of Tiberias.

That was the same God who gave Jonah a second chance to preach to Nineveh, after he fled the first time.

The same God who re-deployed the Israelites against Ai after the sin of one man led to their defeat.

The same God who took over four hundred years to pull the trigger of the covenant curses upon a disobedient Judah, relenting every time a good king came along.

The same God who worked in Paul to reconcile with a young disciple who had abandoned him (Acts 15:37-40, 2 Timothy 4:11) and to urge Philemon to take back a disobedient slave as a brother.

The same God who allowed wayward Samson to go out in a blaze of glory, bringing God’s enemies down with him.

The same God who used David and Bathsheba’s illegitimate union to bear the son who would complete his temple.

Are you sitting on the sidelines in shame, having blown it yet again? God refuses to be finished with you. He will lift you up again and send you back out onto the field for another play. Again. He insists on it. He is demonstrating that it is not about our ability, but about his grace. He is making us new, making us better, every play.

It’s also about his power. He hasn’t forgotten about the final results.

Would you like to know how that football game ended?

Get back out there.

7 thoughts on “God Will Keep Giving You Chances”