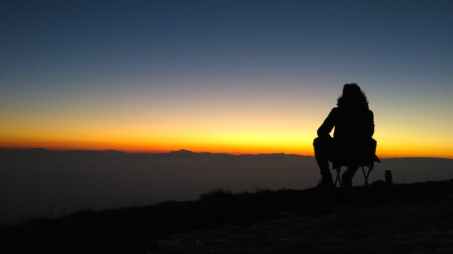 So I cannot approach you with judgment in my heart.

Instead, I can relay this story.

“But the father told his slaves, ‘Quick! Bring out the best robe and put it on him; put a ring on his finger and sandals on his feet.  Then bring the fattened calf and slaughter it, and let’s celebrate with a feast, because this son of mine was dead and is alive again; he was lost and is found!’ So they began to celebrate. (Luke 15:18-24)

Take in the gladness of this moment. The father doesn’t sit down forbiddingly, list his son’s errors one by one, or even let him finish his apology. He runs to him. You can see a weight lifted off his shoulders, months (years?) spent grieving over his son’s absence, perhaps waiting with dread for news of his death, evaporating in an instant. His relief and delight are unrestrained, bountiful, fierce.

And when the older brother would bring up the returner’s past (could we insert your own experience with bad churches here?), he is gently rebuked – and invited into the celebration.

But he replied to his father, ‘Look, I have been slaving many years for you, and I have never disobeyed your orders, yet you never gave me a young goat so I could celebrate with my friends.  But when this son of yours came, who has devoured your assets with prostitutes, you slaughtered the fattened calf for him.’

“‘Son,’ he said to him, ‘you are always with me, and everything I have is yours. But we had to celebrate and rejoice, because this brother of yours was dead and is alive again; he was lost and is found.’” (v. 29-31)

May God spare me from being the older brother. If I ever have, I repent of it. For Jesus also crafted whole stories to rebuke such a heart (read Matthew 18:23-35 for that), to shield the returning from the condemnation of those already at home.

Instead, may I be an older brother who invites you home. Who marshals the servants. Who helps find the robe, unshelf the ring, dust off the sandals, grill the steaks, and lead the household in a toast of gratitude.

This Father waits for you as well.

What if there is only relief and reconciliation waiting on the other side of admitting our past to God? What if God has decreed that no black record can restrain his love?

Test the story. Come home to God today and find rest for your soul.