Last Thursday life dealt me an unexpected jolt (I did have a hand in it). By the time you read this Monday morning, life could look much different for me. And for four days, I’ve borne a familiar stomach knot of anxiety over it.

What if the worst happens?

Something you should know about me: I’m very literal. I engage in military-grade overthinking. That can prompt me to use good theology in bad ways.

God has come through over the years, sometimes in pretty spectacular albeit last-minute ways. But do I trust him to provide for me again? What if this time is different?

I’m fairly committed to the idea that God disciplines us for our good, and that his rod can take any form he sees fit. We can’t place parameters or expectations around his discipline, nor hold it against him if it’s harsher than we desire. That’s just solid theology. (And observable reality.)

But I can twist that, too. The creative lobe of my mind can manufacture all kinds of ugly scenarios God might emplace, then recruit the “solid theology” lobe to counter any “oh, come on, he’s not going to do THAT” reflex. After all, we can’t place limits on how hard God swings his rod, right?

The end result is that I end up imagining the worst-case scenario in most situations and guilt myself into expecting it.

But then I remember the Old Testament.

The Old Testament is one long remembrance of humanity’s forgetfulness. The ancient document records God coming through for his people again and again, and each time the sun seems to rise on an Israel that’s forgotten what he did. A new need arises and Israelites fear that things will be different this time.

The ten plagues free the people from Egypt; they cry out once cornered against the Red Sea.

The water parts and Israel is delivered; the next morning, they wish they had more water.

God slakes their thirst; later, it’s food they are short of.

Bread arrives; they disobey God’s commands and hoard it, though it’s promised to return the next day.

The seventh day approaches; now they’re commanded to hoard, on God’s promise that the bread will keep this time. Instead, they go out looking for more.

And lest you think the Israelites are stumped by new problems, in the very next chapter they’re out of water again, and react in the same way.

Well, I cannot rule out the possibility that God will allow what I most fear today.

But will that destroy me?

Will I forget his goodness past?

The God of the Scriptures didn’t rescue his people on Friday so that they would expect something different on Monday. He rescued them to establish his character and trustworthiness.

Either God delivers me or disciplines me. Either way, I’m not destroyed.

Perhaps I will put an end to this overthinking and simply let God decide what he’s going to do.

For you did not receive a spirit of slavery to fall back into fear, but you received the Spirit of adoption, by whom we cry out, “Abba, Father!” The Spirit Himself testifies together with our spirit that we are God’s children, and if children, also heirs—heirs of God and coheirs with Christ—seeing that we suffer with Him so that we may also be glorified with Him. (Romans 8:15-17)

Last night in youth group, we discussed God’s adoption of his people – how adoption serves as a beautiful metaphor for how God, in his kindness and magnanimity, chose to save men who, because of sin, were not his own. He initiated the pursuit; he made the first move. There was nothing a believer could do to seek God first; he reached out with his offer of salvation, and we responded. Amazing.

But it occurred to me last night that God doesn’t just initiate; he finishes. He closes.

END_OF_DOCUMENT_TOKEN_TO_BE_REPLACED 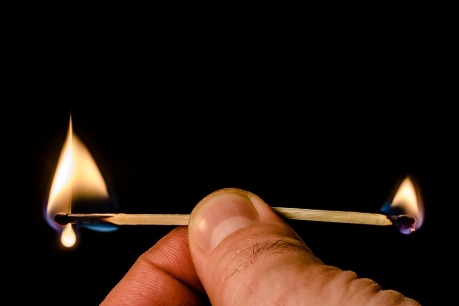 The other day, I learned the physiological mechanics of a mosquito bite.

Some of you might have seen the same animated video that I did as it makes the rounds on Facebook. I learned that it’s really all about the mosquito’s saliva (ick) – it acts as both an anesthetic and anticoagulant, allowing the female to get the blood she needs (what a wonderful provider God is!….I think…).

Then the video concluded with an interesting point: the actual swelling and itching of a mosquito bite isn’t directly caused by the saliva. It’s caused by the body’s immune  response to the bite. The saliva is an allergen, which triggers antibodies to attack the foreign intrusion, and that causes the swelling and itching we’re all familiar with as we writhe around upon the grassy ground, scratching like gangbusters.

I was reminded of other bodily responses. A lot of symptoms we experience to various problems aren’t actually caused by the problem: they’re the result of our body fighting the virus or the infection or whatever.

We would not want to live without physical pain.

END_OF_DOCUMENT_TOKEN_TO_BE_REPLACED

Have you ever been convinced that God is deliberately withholding something from you so that you’ll become more satisfied in him?

We want something. Said something delays and proves elusive. We consider the idea that God is behind the delays and start exploring the reasons why he might say no (a long research, as many of us know).

We discover a number of possibilities, each with a basis in Scripture. We learn that we might simply need to persist in prayer. Elijah did – and on something that he not only already knew was God’s will (making it rain) but held the sole responsibility in Israel for making happen, by God’s own decree.

We consider the possibility that our requests might not be as beneficial for us as we think (or that their timing might not be).

We learn that Satan has a role in our lives, and that God provides tools for resisting his ravages.

We examine our own hearts and lives to make sure our own sin is not setting us back.

But stick to your search for long enough and one theory will start cropping up and standing out more than any other: the idea that God is saying no purely to make you more satisfied in him.

If you’re reading the right pastors and authors, this one will find its way into your vocabulary. “Satisfied in him” is probably John Piper’s favorite three words. It was John Eldredge who introduced me to the idea: that God will allow difficulty or delay into our lives and prayers every once in a while, in order to purge us of our distractions and fruitless pursuits.

At first, it’s interesting from an academic point of view. You nod and acknowledge the fact that God alone is worthy of our praise, worthy of our highest value, worthy (and capable) of being the one vessel of satisfaction from which our hearts can draw.

But as time goes on, the idea gets…irritating.

At some point down the road, in a moment of deep frustration or heartbreak, you get honest: “God, why do you have to be this way?” It strikes us that God appears to be acting like that manipulative mother you see in bad teen movies, the type who sabotages her daughter’s relationships so that she’ll stay at home. “Why are you jealous of my happiness?” we bitterly pray. Perhaps the thought only flashes through our mind instead, and we guiltily stuff it down, but it still happened. It’s a vulnerable moment, as God seems distant and indifferent to our groaning prayers.

But God is not acting out of fear, loneliness, or pettiness, as the manipulative mother might. Such motives are impossible for him.

Instead, he is acting out of his delight for us.

“My son, do not make light of the Lord’s discipline,
and do not lose heart when he rebukes you,
because the Lord disciplines the one he loves,
and he chastens everyone he accepts as his son.”

If unanswered prayers are a form of suffering (and they certainly can be, depending on the prayer), then they are also a form of discipline – and a sign of God’s ownership and acceptance of us. I’d rather that than getting everything I want but wondering whether I was really his.

God cannot give us a happiness and peace apart from Himself, because it is not there. There is no such thing. – C.S. Lewis

That statement is quite alien to our daily thinking. We think we can get it. We really do. Just answer this prayer, give us this thing, and we’ll be good. Many of us don’t know that we can experience peace from God, much less that it’s more real than anything else.

God is not playing spoilsport, holding good things spitefully out of reach until we give him some attention. He is sweeping ugly spikes and pits out of the way until we can receive his greatest gift: himself. The idea that he is the greatest gift requires a total rearrangement of our worldly thinking. But it is a journey worth taking.