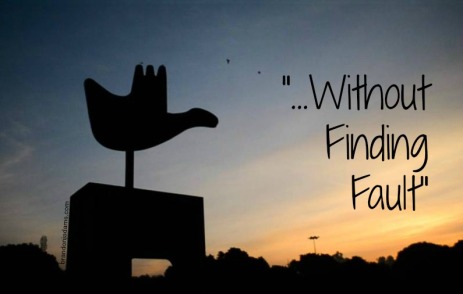 So I’m sitting in youth group yesterday, listening to someone recite James 1 from memory. It’s a well-done affair, with only an occasional reversion to cue cards. But one verse leaps out and trips me up, and it occurs to me that it’s always done so.

“If any of you lacks wisdom, you should ask God, who gives generously to all without finding fault, and it will be given to you.” (James 1:5)

It makes you blink, jump back, and scan it again to make sure you read it right. As if you were reading this sentence and suddenly octopus.

It’s the Bible, so it can’t be a typo (despite what the skeptics say). It must be the truth. But it reveals a deep heart belief of mine, like the beam of a flashlight piercing deep into a long-forgotten basement.

I thought all God ever does is find fault.

There’s certainly plenty of fault for God to find in me. He’s certainly entitled to search; our lives and hearts are an open book to God, and he has the right to sanctify us and make us more like him. I’m very accustomed to that process. Any healthy Christian is.

I’m not sure I can be trusted with such grace. I sin constantly. If God blesses me while I’m sinning, wouldn’t that encourage and enable sin? Wouldn’t it make sense for God to wait until I’m in a strongly obedient position before moving? It’s what I’d do in his position.

But I’m not in his position. And as it does so many times, God’s grace defies my expectations.

When they had finished eating, Jesus said to Simon Peter, “Simon son of John, do you love me more than these?”

Again Jesus said, “Simon son of John, do you love me?”

He answered, “Yes, Lord, you know that I love you.”

The third time he said to him, “Simon son of John, do you love me?”

Peter was hurt because Jesus asked him the third time, “Do you love me?” He said, “Lord, you know all things; you know that I love you.”

Jesus, having drunk Peter’s fault on the cross, is reinstating him – one forgiveness for every time Peter denied him before the crucifixion. Not just reinstatement, even – promotion. It is understood by theologians that Jesus is appointing Peter to lead his post-ascension church.

This is amazing. Keep in mind that Peter should have incurred the curse of Matthew 10:33 – “…whoever disowns me before others, I will disown before my Father in heaven.” By our best understanding, there is no reason Peter should even have a place in the Book of Life right now. Yet Jesus not only forgives him, he hands him a place of leadership in the coming kingdom!

I would have moved differently. I would have set up for my church leader, not someone who hid and denied him like a coward (talk about a bad example), but someone who stood heroically by Jesus in his darkest hour.

Of course, there was nobody who had stood by him. And perhaps that’s the point – the Passion account echoing our depravity and our total inability to please God on our own.

So God leaned the other way and brought in the Cross to take our fault away.

It is that grace he wants us to learn, his generosity and magnanimity. No more “earn the rain” like the Old Testament. God is flooding his kingdom with almost stubborn favor. The paralytic lowered through the roof is forgiven and healed. A Canaanite woman, strangers to the Law of Moses and its righteousness, has her daughter healed. While we were yet sinners, Christ died for us.

The context of this passage is wisdom, of course, but I don’t even deserve that, and the point is not which blessings God offers, but the character of God being revealed.

Do I live as if this were true? Does my view of God reflect the gentle graciousness of James 1:5?

That night, God used James to tap into deep lies in my heart about who God is. Do I really believe he’s gracious and compassionate, slow to anger and rich in love (Psalm 103:8)? Or am I constantly waiting for the drop of a cosmic other shoe, making “struck by lightning” jokes? When I come before him in prayer, do I expect him to triple-check my week’s track record like an IRS agent and apportion my daily bread accordingly? Or do I see the God who promoted Peter?

I’m still not sure how all this works in practice. I still believe in the principle of the talents (Luke 19) and wonder how much of his kingdom must genuinely be earned. There were times Jesus had to withhold from people, and there have been times he’s withheld from me.

But he remains, defiantly and freely, a God of grace. Whatever he’s willing to give is up to him, but that generosity is where I’m starting from. May God help me.

Drawn to redemption by the grace in his eyes
If his grace is an ocean, we’re all sinking

33 thoughts on “God Gives Generously to All – Without Finding Fault???”