As I was wrapping up Air Force basic training (never have seven weeks passed so swiftly and so slowly), one of the final bureaucratic details was the chance to tell the Air Force our preference of first posting.

We were given a “dream sheet” on which to list eight desired destinations. We could select a preference of base, state, region, or country for them to promptly ignore.

Some of us got an insider tip: wait until tech school to file your sheet. For whatever reason, sheets filed there tended to be actually seen by someone, whereas those filed at basic vanished into the same black hole that has probably consumed all my socks.

So I waited until tech school, filed my sheet, and waited with bated breath. The sergeant announced postings weekly at formation, usually triggering jeers for anyone getting “Why Not Minot?”

Finally, my turn came. I got a posting in the…half of the country I’d requested.

Did the Air Force just not care?

END_OF_DOCUMENT_TOKEN_TO_BE_REPLACED 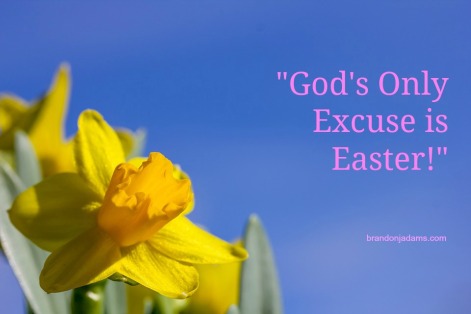 In Disappointment with God, author Philip Yancey describes a series of conversations with a young friend named Richard, who has turned away from the faith.

One of Richard’s big beefs with the idea of God is the conundrum of suffering. This one gets us all. Why does a loving and powerful God allow suffering, and all that.

Over the last few years, I’ve felt a part of me becoming impatient with that question, as I’ve found too many skeptics to be merely hiding behind it rather than honestly seeking an answer. And there are answers. But I’ve tried to hold off my cynicism and remain understanding, for I know suffering weakens and disheartens. It’s especially true for the skeptic, as they have no hope of an “inexpressible and glorious joy” (1 Peter 1:8) to sustain them.

After lambasting God for his treatment of Job, his apparent detachment from mankind, and every other angle he can, Richard eventually rounds it out with an interesting phrase:

“God’s only excuse is Easter!”

It was one of those phrases that sums up everything you’ve ever suspected but never quite has the eloquence or brevity to say.

I wouldn’t say Richard is theologically correct in saying that. God has, off the top of my head, at least one other great excuse for allowing suffering: the chance to demonstrate his ability to sustain and empower us in the middle of it. It’s quite Scriptural to say that this is sometimes the sole reason for our suffering: creating an opportunity for him to make our hearts ironclad, untouchable by despair and brimming with joy even in jail or on the sickbed.

But you have to admit: even if Easter were God’s only excuse, it’s a whopper of an excuse.

Which means that judging God by what happens on this earth is…well, you can hardly call it a worthy verdict.

The ideas of heaven and hell may feel like cheap cop-out and motivation, respectively, for a church trying to boost its numbers. It may feel ridiculously out of touch with our modern era’s respect for what can be seen, felt, and proven. It may feel like the last thing you want to hear in the midst of today’s suffering.

But how it feels has no bearing on whether its claims are true.

That is why the claims of Christianity are too great to ignore, or dismiss as good-for-you experiential truth. They demand examination.

And if the story of the resurrection of Christ truly happened, if it bears examination then it’s all true – making the Gospel a message of enormous generosity, and enormous warning.

Though God is bringing all things together for his own glory first and foremost, he is hardly callous enough to leave our groaning hearts out of the equation. He has promised us rewards. He has prepared a great many things for those who will believe; he asks only that we receive him.

I pray fervently that the unbeliever might examine these claims.