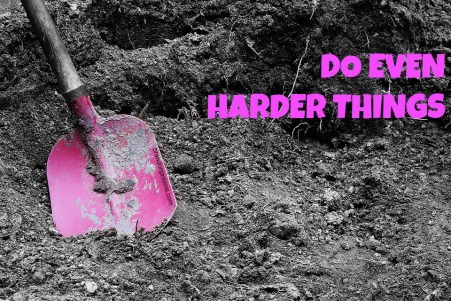 There’s a book called Do Hard Things, by Alex and Brett Harris. I’ve heard it cited by a number of hopelessly inspired teenagers who have been drawn out of their comfort zones, I’m intrigued. But I haven’t gotten a chance to read it.

So perhaps it is redundantly that I ask –

Are we really doing hard things?

A young man from our youth group preached a sermon from Acts 10 last night. I hope I’m not simply regurgitating what he said (is that illegal?), for something fell together for me in my own words as I listened, and I’ve got to get it out.

It was not ten chapters into the era of the church, the era of salvation through Christ, that the gospel went from being “just for Jews” to open to all nations. You’d think this turn of events would have been obvious from “and Judea and Samaria and to all the ends of the earth” (1:8). But to get his message across, God orchestrated an encounter between Peter and a Gentile – a centurion of the hated Italian Regiment, natch – and brought the Spirit upon him in full view of Jewish believers. After that, there could be no doubt that the gospel was for Jew and Gentile alike – anyone who would hear the Word and respond.

What’s crazy is that God had to send Peter three visions to get him into position.

Would Peter have gone with Cornelius’ messengers without the visions coming immediately beforehand?

That the visions were needed first – and evidence from his own life – implies that Peter was ready to take the Gospel to his own Jewish countrymen before the Gentiles.

That’s no small statement, given the hostility of the Jewish authorities. These countrymen of his were the ones who had persecuted him, as recorded all through Acts (Ch. 4, 5, 7, 8). That Peter would rather witness to them than to the Gentiles says a lot about his heart towards Gentiles – or lack of heart, until the Spirit got involved.

Similarly, Jonah was asked to preach repentance to despised Nineveh. He refused and ran. As my pastor once asked, why did Jonah ask to be thrown into the sea once God’s displeasure became clear, instead of simply repenting on the boat and pledging to obey? My pastor’s conclusion conclusion: Jonah would rather die than preach to Nineveh.

So the “hard thing” has nothing to do with nation. It has to do with our hearts.

Consider: for some of us, it’s actually easier to go and help Muslim believers in another nation. For one thing, we already have sympathy towards them. Both the Christian and worldly medias have seen to that – rightfully so. They are suffering, in need of every form of charity. For another, we won’t face consequences for our witness if we’re only there for a couple weeks. We go, we share, we return. It frees us up to be bold.

But our obese, obnoxious, frequently intoxicated neighbor, who blasts Pearl Jam at all hours of the night, lets his St. Bernard use your lawn for a toilet, and isn’t moving any time soon…does he get compassion?

Does God value his soul less than that of a foreigner?

Is it possible that he’s the “hardest thing” for some of us?

Some Christians won’t eat with those who swear. We swear off anything that strikes us as a worldly trapping – a tattooed guest in church, or working at an unsavory mechanics’ shop – without asking if there might be lost people there. It’s these people against whom our hearts are often hardened. Perhaps the “hard thing” is not the hard thing to do, but the hard thing to want to do.

I say this with some trepidation, for I know God will hold me to this, too. But I trust him to empower us. Let us not be like Peter, for whom being sent was like pulling teeth and canvases of dead animals. Whether a refugee in a distant country or a neighbor across the fence, I trust God to send us well.

Perhaps this all is what Do Hard Things says. If so, I guess I’m saying it again. Some things can’t be repeated enough.

24 thoughts on “Do Even Harder Things”