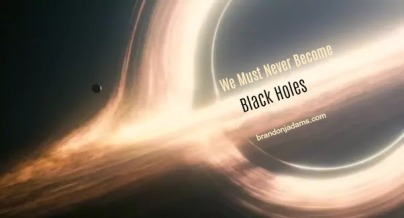 I’m stoked. To convey this illustration, I get to be geeky – I get to explain the nature of a black hole, an exotic celestial object of great lifelong fascination to me.

Black hole are collapsed stars, grown so dense that their gravity, out to a certain distance, is strong enough to arrest their own light. Since an object is only seen by the light it sends to your eyeballs, a spherical region around a black hole appears, well, black to the outside observer. The star is still inside, but forever hidden because its light can’t escape.*

For a long time, I was a black hole. Sucking everything in, emitting little. God was working on my inside, but it was a process.

Several years ago, I chanced into a dating relationship. We had a good five months before she called it off. It happens. (She’s married now.) But it was a revealing time. I got a chance to see how such companionship affected me, what it exposed.

Amongst the discoveries: while we dated, I started taking risks. I found a greater enthusiasm for people, asking how they were, hearing their stories.

And after the relationship ended, I found myself tempted to revert to introversion. The tug of social hesitation, fear of what others think, disappointment with life, etc. reasserting itself, overwhelming my emanations. Like a black hole, hiding my light.

Whereas during my relationship, I’d become bolder. I realized it was a subconscious reaction to having backup. Some married people might not understand this (or forgot), but some singles will. Prior to dating, I’d had nothing to fall back on except the four silent walls of my apartment. Risks were daunting. With a girlfriend, I had support if a risk went sour. A teammate. Life felt a little safer, more settled – a springboard for qualities and gifts that previously lay dormant.

And as I realized this, another thought sprang up in response:

Why should it take a girlfriend to unlock this stuff? A relationship is certainly a legitimate blessing, but I HAVE GOD!!! I have my very Father  – the one who sent his Son to die for my sins and enable close communion with him, the one who delights in me – at my back. What have I been doing with him?

I suspect I’m not alone. It goes to show how inexperienced we are in God’s love, or how muddy and distorted our views of him must be. It’s not like the problem is on his end. We choose to operate with so little of him.

I’m convinced that it’s an insult to God. It’s certainly not how we’re called to handle singleness.

Admittedly, it’s rough to continue radiating when it takes everything we have just to get to church and we frankly couldn’t give a fig about others. Tragedy or built-up frustration slumps our shoulders. But that doesn’t change our situation. We are called to be a light to a dark world.

So I now make a conscious effort to keep pouring and pursuing, single or not. God will just have to be my strength, eh?

Is there a source of emotional gravity arresting your light? Don’t let it. We must never become black holes. There are times when God lets us grieve. But eventually, we must reach escape velocity.

After all, Jesus’ disappointments never stopped him.

*Geek note: those arcs of light that appear above and below the black hole? That light isn’t actually there. What you’re seeing is the backside of the accretion rings, the part behind the black hole; its gravity is bending the light from the backside, rerouting it above and below the hole instead of blocking it. How often do you get to naturally see right around an object?

37 thoughts on “We Must Never Become Black Holes”