Brothers, if someone is caught in a trespass, you who are spiritual should restore him with a spirit of gentleness. But watch yourself, or you also may be tempted. Carry one another’s burdens, and in this way you will fulfill the Law of Christ. (Galatians 6:1-2)

Seriously – how epic. Jesus wants his church to be a place where people feel unburdened. It should be a building people are tearing off the roofs to enter – a refuge, a house of hope, a place for healing and companionship and peace. Imagine a forty-pound backpack coming off your shoulders after a hike. It’s wonderful; you feel immune to gravity, able to leap ten feet. That’s Jesus’ vision for the church! 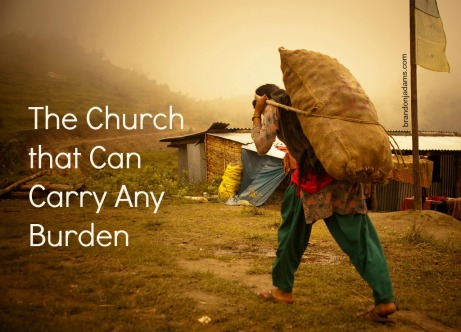 Of course, that’s not what jumps to mind when many people hear the word “church”. They see it as a place where burdens are added, not lifted.

Part of this is not our fault as Christians. Folks feel their sin when God comes near (he’ll do that), and they resent that burden instead of casting it off through repentance. But we do play a role. Too many congregations view their church as a hospital that must be kept sterilized from any sullying influence, forgetting that the point of sterilization is to heal the sick (Luke 5:31). The result is a seeming allergy to anyone carrying sin or brokenness. Sometimes, honestly, it’s no more than irritation at the quirks and sharp edges of others (“Life would be so much easier without people” and all that).

I read a rather brilliant blog post the other day that included this quote: “You are not a burden. You HAVE a burden, which by definition is too heavy to carry on your own.” Yes. The sick cannot carry burdens. They need help. It reminded me of Galatians 6:2, and it got me thinking – what if we viewed the dirtiness and complications of other people, not as threats or inconveniences to ourselves, but as burdens to be carried?

But have we missed some categories of burdens?

We can see and handle the obvious burdens, like pain and hardship. Especially when we like the carrier. But ask someone outside the church what burdens they’re carrying – and what new burdens appear when they step into the church foyer. The test of our Christian love is, Do you feel unburdened, new soul? Is this yoke easy, as Jesus wanted (Matthew 11:30)?

I’m here to expand the definition of “burden” until you’re hiding behind the sofa. Don’t worry, I’ll be joining you guys back there. This isn’t easy. But it is possible.

Some people are difficult. They just are. Chronic shyness, social clumsiness, a voice that’s always too loud…they’re just hard to be around. We do what comes naturally: let them fly alone. And once that’s happened to someone for a while, you can bet their personality has become a burden to them. That was my story for a long time.

But the only people Jesus found hard to be around were Pharisees. You’d expect the Son of an infinite God to be rather expansive in any ability, and this includes loving people. And we have access to this very Jesus, and his strength, through his indwelling of us!

Sometimes I think the heavily tattooed, dyed, and facial-studded overreact a little to the stares of Christians. It’s not judgment, necessarily; it’s something akin to fascination, like staring at an aurora.

But…if that unintentional rudeness is not followed by a smile and an extended hand, what are they to think? It’s not for no reason that the counter-cultural are known for rejecting church.

Let’s not be so thrown off by appearances. Jesus hung with lepers. And we are his hands and feet.

New believers sometimes don’t realize that certain habits are sinful. Yet we’re happy to jump on them as if their salvation should have come with preprogrammed memory of the entire Bible. I too wish that embryonic faith was like those cool chairs in the Matrix, but instead it often feels like a bombardment of new expectations flying in from every corner. Let’s teach and be gracious.

Rome and righteousness aren’t built in a day. It’s no excuse to slack on the job, but the fact remains that some sin will cling. And Christians who are genuinely running towards righteousness only find their road longer if they’re made to run alone.

If you’re worried about sin’s destructiveness (understandable), remember that Galatians 6:1 merits both caution and gentleness. Paul is well aware of how sin acts like a cancer; yet both he and Jesus urge gentleness.

…but seriously, why are we so threatened by each other? The obedience people don’t get along with the “power and promises” people (and vice versa); the foreign missions folks and the local outreach folks get subtly resentful of each other. What is this? We have no room for other people’s convictions, the roles God has called us to play individually? This tension is a burden, a blemish on our call to unite.

I absolutely include myself in this. Let’s get rid of it. Disagree if you must, but let love and respect reign. We’re all wrong about something anyway.

A drug addict or sexually disreputable person walks in Sunday morning and we frown with worry. We fear he’ll drag our reputation down, knock over our house of holiness cards, or something. And we turn away.

But there is proper guardedness against sin, and then there is hypochondria. Would a hospital turn away a bleeding patient? Even the truly contagious can find a place to be treated there. Come on. Has it occurred to nobody that they might feel awful about their sin and the last thing they need is to be shoved out? Church is right where they should be! They need welcoming arms.

It doesn’t say much about us when we can’t handle others’ burdens. Jesus is supposed to be making us strong. He wasn’t affected by the sin around him; his holiness spilled into others. And he calls us to be like him. At some point, yes, people’s burdens are their own; Paul even teaches that callous believers must (with a heavy heart) be sent to the isolation ward. But let us find that point accurately, not shrink away from legitimate burdens.

I know you have your own burdens. I have them as well. When my week is crashing down and threatening my month, the last thing you want to do is love others. But you can. You can. We’re commanded to, and with any command comes the power to obey.

4 thoughts on “The Church that Can Carry Any Burden”