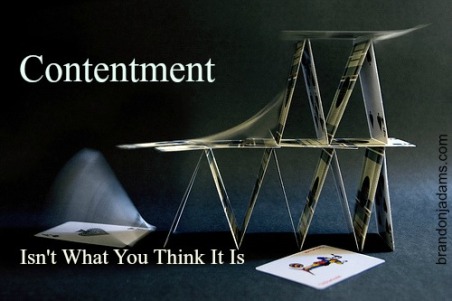 Lately, a well-respected pastor in my town has been preaching on relationships. His social media-savvy congregation has filled my Facebook feed with image ads for this series, promising to reveal exciting truths about God’s plan for singles, for our futures and the relationships and marriages that might be in store.

Part of me is intrigued by what he might have to say. The other part of me goes,

“I’m sick of hearing it. I’m sick of even thinking about it. I struggled for
years to reach a detente with God about my singleness. My contentment is a house of cards. I don’t want anything coming along and knocking it over unless it’s God saying it’s finally time.”

I don’t think I’m alone in this. A few years ago, I was attending a different young adult group that was asked to vote on two choices for its next Bible study. One option was on relationships. It lost by a landslide. A couple years later, I went to a retreat where the invited speaker didn’t get his orders from God on what to preach until he was in the car and en route. The topic turned out to be…marriage. After the retreat, he shared with me why God had waited to instruct him: several attendees, all singles, had told him that if they’d known the topic beforehand, they wouldn’t have come.

For whatever reason, many of us don’t want to hear another word about our singleness.

Some mistrust marriage, thinking it should die horribly as an institution. Some of us don’t want to get our hopes up, wary of yet another sermon that will feel validating and exciting for a while but end without a prospect in sight. Others just want to live their lives and are fed up with the heckling. “So when are you going to settle down and move on with your life, hon? I know this random stranger you should meet!”

And some, like myself, know how hard we’ve fought to attain peace and how fragile the victory can be. We’d rather just go on with our day and not give it any more thought.

It feels like there isn’t room for both God and our desires. We know God must come first. So it seems that contentment means the urgent killing of our longings, pretending we don’t want them, thinking God disapproves of them because they’re not him.

But what if that’s not contentment at all?

Consider the attitude in which this abandonment of our desires can be done. It can be out of sheer, spontaneous delight for our Savior and what he’s accomplished for us. But they can also be an outgrowth of bitterness. “What do YOU care about my desires, God?” “Well, I guess he’s stingy.” “He doesn’t understand me.”

These attitudes are no less sinful than idolatry.

From the days of the first family, the Bible tells us to offer God our firstfruits, our most important treasures and accomplishments – from children (Exodus 22:29) to harvests (Proverbs 3:9). Even when David is given a cheap way to make restitution to God, he insists on giving something valuable instead: “I will not sacrifice to the Lord my God burnt offerings that cost me nothing.” (2 Samuel 24:24)

In every conceivable category, we are called to sacrifice what truly costs us. Thus we prove that we’re placing God first, in a way that we can’t fake. This even extends to our greatest possessions, our very lives (Luke 9:24).

When it comes to whatever dreams, hopes, or desires we hold for this life, we have three options. We can put them ahead of God, which is obviously bad. We can bury them, suppress them, try to shove them aside thinking that God wants us to. This is what we usually call “contentment”.

The thing is…how much does it really cost us to surrender a desire that we deny? I would submit that that isn’t our firstfruit. It’s a sacrifice that costs us nothing.

It’s much harder and costlier to sacrifice a desire that we’ve fully acknowledged and embraced.

Going a little farther, he fell with his face to the ground and prayed, “My Father, if it is possible, may this cup be taken from me. Yet not as I will, but as you will.”… He went away a second time and prayed, “My Father, if it is not possible for this cup to be taken away unless I drink it, may your will be done.” … So he left them and went away once more and prayed the third time, saying the same thing. (Matthew 26:39, 42, 44)

Jesus wasn’t putting on a religious smile and giving Sunday School answers. He let his desire be fully known to God. He was persistent about it. Yet in the end, it was the honest plea of his heart that he yielded to God. That’s our third option. He gave full weight to his request, and made that his sacrifice.

We can have other desires, provided they’re not sinful. God is gracious that way. When they are bigger than God, when we must have them rather than being able to rest in God’s love – that’s where the trouble lies. That’s when God must sometimes go to war against our desires, so that they won’t destroy us.

But when our peace in Christ grows higher and greater alongside our desires, we find that we can give them up, let them go, wait to see how or when or if God fulfills them.

That’s contentment. It’s no longer a house of cards, because it’s founded on something that cannot be toppled. It’s then that God can safely stir our desires, reawaken them, teach us and prepare us for them.

It’s a groan-worthy prospect sometimes. At first, I wasn’t eager to check out that relationships series by Levi Lusko. But I remember God distinctly telling me to go to that retreat many years ago, and how much we all gained from God’s teachings on “becoming marriageable”. God had something important to teach me, even if it wasn’t time to put it to use. He wasn’t impressed that I thought I’d already heard it all. (Millennial brothers and sisters, we must avoid that arrogance. Scripture has no problem repeating things.)

God might have something in this new series for me; he might not. But at least I’ll be open to it.

‘Cuz I know I’ll be just fine either way.