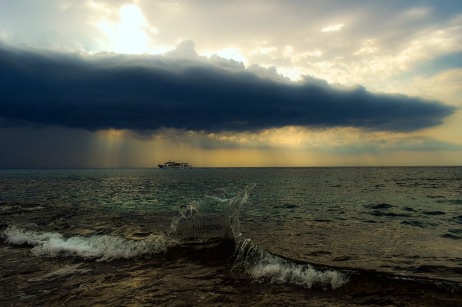 For this I’m grateful: my denominational tastes put me in position to drink a lot of sound Bible.

My social media feeds are culled inlets of soulful Scriptural truth. I get a foundation of obedience and surrender. Names like Tozer, Chambers, Piper, ten Boom, and Elliott roll through my feed, highlighting the narrowness and ache of Jesus’ path. I get it. Life is not a flowery bed of ease, a get-rich scheme, or a catapult to political power, or about me. Though this isn’t pleasant news, it’s true, and I would rather know up front than blindsided later.

But on occasion, it can be such a drag. (Yeesh. Is that okay to say?)

There’s plenty in this vein on how to handle a “no” from God. We know he is not a vending machine. We learn that sometimes perseverance in prayer is needed. We understand that God has his sovereign reasons, that he’s up to things above our pay grade. We accept the immense value of patience and suffering in shaping and refining our souls, in teaching us to rely on the giver rather than the gifts. It worked for Jesus (Hebrews 2:10).

To be in both worlds full

Is more than God was, who was hungry here

And if we read Scripture with ice-cold objectivity for long enough, we eventually pick up the idea that, quite frankly, disappointment in our lives is sometimes the only thing that will keep our wandering hearts bound to God.

Meanwhile, we broach the topic of miracles and answered prayers oh so gingerly. Certainly not with boldness. We’re too uncomfortable for that; it feels vaguely immature. Risky. You know what I mean. Perish the thought of that health-and-wealth business. We’re determined not to get our theology wrong, and that’s excellent, because we value getting Jesus’ words right (not always a fashionable practice).

But sometimes I wonder…

Are we just having a hard time hoping?

Are we just making excuses for our unbelief?

Are we just trying to muffle a voice deep down that’s wearily confessing, “I just don’t expect much from God. He doesn’t work that way anymore. Let’s just obey now and we’ll get heaven later.”

It occurred to me that I feel better equipped to handle a no from God than a yes.

Then Peter came to himself and said, “Now I know for certain that the Lord has sent His angel and rescued me from Herod’s grasp and from all that the Jewish people expected.” When he realized this, he went to the house of Mary, the mother of John Mark, where many had assembled and were praying. He knocked at the door in the gateway, and a servant named Rhoda came to answer. She recognized Peter’s voice, and because of her joy, she did not open the gate but ran in and announced that Peter was standing at the gateway.

“You’re crazy!” they told her. But she kept insisting that it was true. Then they said, “It’s his angel!” Peter, however, kept on knocking, and when they opened the door and saw him, they were astounded. (Acts 12:11-16)

It’s hilarious. The fledgling church is praying, but when God answers, there’s no confident grinning, no “yep, I knew he’d come through.” They’re floored. God supernaturally keeps Rhoda from bringing the evidence inside so that the story will record them almost resisting good news, coming up with alternative explanations. These downtrodden Roman citizens weren’t used to shining angels and chains falling off wrists.

I can relate. It’s not a “no” that would surprise me from God these days; it’s a “yes”.

How bad is that?

Miraculous events have taken place in my church in the last year and I hardly know what to do with it. God is moving powerfully through South Asia and I’m shaking my head like a dog getting out of the water. He really does this stuff?

But I know why. I’ve witnessed my share of “no’s”, as have we all. Perhaps it’s that disappointment that I’ve wrapped around myself like a cloak for my heart. It’s a practice that walks a very fine line between guarded heart (Proverbs 4:23) and lack of faith.

There are days when I need to read less about the lack of a miracle, and more about miracles.

Fortunately, Scripture’s up for that. Remarkable displays of power, signs and wonders –  Scripture loses vast swaths of its educational value to us if they’re no longer active. They’re for God’s glory, of course, for pointing people to him. But they’re also out of his generous heart and his desire to come through. Why cannot I simply sit back like a little child and let him…?

Like water sloshing back and forth in a pipe seeking its level, I find myself sliding back towards balance in God’s Word – its hope and its surrender.

I won’t accept a fortune-cookie Christianity that outdoes itself every week in predicting exciting new bombshells for your life and never presages anything bad. But neither am I going to truss up my heart in resignation and call it holiness.

How, Lord? How will my inner Rhoda convince the rest of my heart?

Through his Spirit. Only way.

So I will pray, study, and let God do the answering.

Who knows what will happen?

I’m glad you tuned in today. If you found this post to be of value, please feel free to share it on social media. Thanks a bunch!