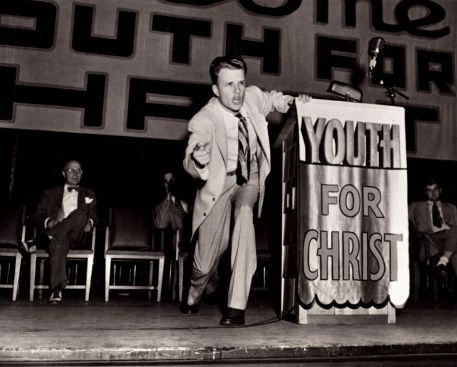 Billy Graham is dominating my Facebook feed today, and well deserved. Millions are in heaven today because of him.

Like many other tributes, one of the first things that springs to my mind when I think of Billy Graham is his reputation with the world. I’m reminded particularly of one thing I learned from reading I Kissed Dating Goodbye in years past:

In the early days of his ministry, Billy Graham experienced deep concern over the public’s distrust of evangelists. How could he preach the gospel to people who assumed he was a fake? As he considered this question, he realized that most people who distrusted evangelists did so because those evangelists lacked integrity, particularly in the area of sexuality. To combat this, he and the close circle of men who ran the crusades avoided opportunities to be alone with women who weren’t their wives.

Think about this for a moment. What an inconvenience! Did these men really fear that they’d commit adultery the moment they found themselves alone with a woman? Weren’t they going a little too far?

We’ll let history answer the question for us. In the last fifty years, what has shaken and demoralized the church as much as the immorality of Christian leaders? What believer can hold his head high when the scandalous conduct of many televangelists is mentioned? But even unbelievers honor the name of Billy Graham. Mr. Graham has earned the respect of the world by his faithfulness and his integrity. How did Billy Graham do this when so many others failed? He set his standards too high – he went above and beyond the call of righteousness.

It’s funny that this rule – avoiding being alone with women who aren’t one’s wife – only came into public awareness recently, with U.S. vice president Mike Pence’s well-publicized use of it. He became a lightning rod for it, of course, because the world would find a way to criticize the administration for pulling cats out of trees, or perhaps for breathing.

But, as we see, the rule was around long before Pence. I’ve always known it as the Graham Rule and wondered why the world only recently heard of it. Perhaps even “Graham Rule” is an anachronism; perhaps it’s been around longer than even he, adhered to by any minister with an ounce of sense and a willingness to go out of their way for the Gospel’s sake.

This Graham Rule may smack of legalism to some. “We must avoid even the appearance of evil” is a line that gets used to justify a lot of strict religious codes of conduct, like staying out of the movie theater or wearing baggy dresses at all times. That’s down to one’s conscience.

The Graham Rule, though, should be universal in the opinion of this blogger. I follow it even in singleness. Holiness can be inconvenient. But as a youth leader and worship team member, I too have a reputation to protect – there are ministries besides “pastor” that deserve to be guarded. Like “Christian”. We’re in a world where the flesh tempts, the devil prowls around, and the media is almost worse than either. Appearances matter.

Graham’s life was a reminder that our reputation in the world’s eyes does make a difference. We mustn’t let their opinion define us, because at some point, if they can’t get real dirt on us, they’ll manufacture reasons to hate us (Matthew 5:11). That’s inevitable. My students were talking about our sexual doctrines last night in small group, and I brought up Matthew 10:22:

You will be hated by everyone because of My name. But the one who endures to the end will be delivered.

Wish I had better news, guys! (Though one of my students pointed out that there is great news in that verse: that perseverence will mark those who are saved.)

But the inevitability of persecution doesn’t mean we should hand the world ammunition on a silver platter. Titus 2:7-8 says,

In everything, show yourself to be an example by doing good works. In your teaching show integrity, dignity, and wholesome speech that is above reproach, so that anyone who opposes us will be ashamed to have nothing bad to say about us.

In a world where too many evangelists have fallen prey to the sirens of comfort and ease, Billy Graham embodied Titus 2. Doubtless he has a massive crown of righteousness to cast at the feet of he who is worthy – as do the throngs of those he led to Christ.

22 thoughts on “Sorry, Mike Pence, It Was Really the “Graham Rule””