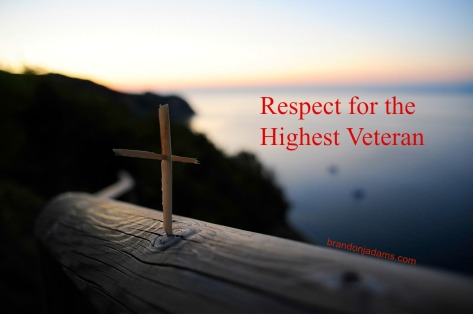 Oddly enough, that exact word isn’t plentiful in our modern English translations of the Bible, and when it does appear (Rom. 13:7, Eph. 5:33, 1 Pet. 2:17 and 3:15 as examples), it’s usually pointed towards others. “Respect for God”, oddly, is a phrase I’ve rarely heard.

You do hear a lot of the phobeisthe, meaning “fear, dread, and respect”, but not a lot of the timēsate, meaning “honor or value”. My first thought was that perhaps “respect” just isn’t a high enough word for God. We prefer phobeisthe, or perhaps “reverence”, for the attitude with which we should approach God.

But for me, I’ve found that “respect” really gives me a foothold on sin.

I recently voted in Montana’s special election. I voted because it’s important and affects the future, but also because it’s colored the past. Many men over the centuries have died to secure my right to vote. We have Memorial Day to honor them. I respect their sacrifice by voting. I do wish that our political candidates themselves would respect those sacrifices by becoming better people with better ideas, but that’s another post.

(Quick aside to the booth official for my precinct: I appreciate your enthusiasm for the democratic process, but please, be careful where you jab me with that “I Voted” sticker.)

It hit me the other day: it seems that I show more respect for American veterans than I do for Jesus.

Jesus chose to shed his glory and become a veteran of the human experience. Most American soldiers led more privileged lives back home than Jesus did; few have died as torturous a death as our Lord; even fewer (read: zero) deserved better; and certainly none died for a greater prize offered to more souls.

I respect the heroism of American veterans by participating in our democracy, paying taxes, and contributing to law and order in every way prescribed. I even had my own stint in the military (though, in all humility, both the time and the danger I experienced fell far short of what our WWII veterans saw).

When a sin presents itself before me as a possibility, do I choose to respect all that Jesus went through on the cross to secure eternal life for me? Do I give it the proper due and appreciation?

Or do I give the nails another thwack with my hammer?

It’s not like I do nothing to honor Christ. I blog about him. I’m active in my church. I’ve gone on mission. But Christ commands purity in every area of our lives, and there are too many battlegrounds I’m tempted daily to concede without a fight.

Well, I found out that the earthy, grown-up tang of the phrase “respect for what Jesus has done” makes a nice tool for keeping myself clean of sin. I think of the cross, and it slows my roll towards sin. It’s not like “thinking of the cross” was never available to me until the word respect linked up. But for some reason, the word resonates. In the haze and hot tumult of the battle against sin, I’ll use whatever weapon works, and this works.

We gladly honor the dead. Let us honor the One who didn’t stay dead.

20 thoughts on “Respect for the Highest Veteran”