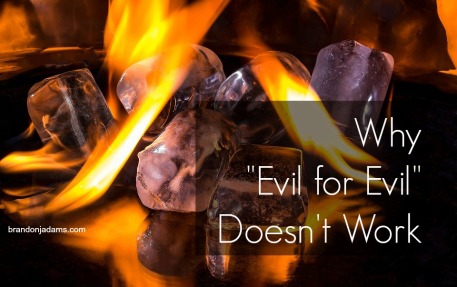 As I write this on January 4th, the temperature is 8 degrees below zero. The air is painful to breathe. I’m keenly aware of all my nose hairs. Pipes are freezing, and every traffic light in town has somehow been reprogrammed to turn yellow at the exact moment where I must either slam on the gas and risk a ticket or slam on the brakes and risk destruction. I blame the Russians.

Now, you would not walk into your house in these times and say “Man, it’s sub-Arctic in here, let’s open the door.” That would fix nothing. In fact, it would worsen the problem; sub-Arctic would become Mars. Instead, you turn on the heat. It just makes sense.

Someone at work triggers you in some way. They yell at you, or circulate an unfair or inaccurate comment about you behind your back. Our first instinct in these situations? Hit back somehow. Defend our honor. Eye for an eye. Maybe we yell back; maybe we spread a rumor about the other person, or just bring up a genuine flaw in them to “balance things out”, even if it has nothing to do with the matter at hand. At the very least, we feel like we haven’t just rolled over and taken it, right? That would look weak.

Except…has it ever worked? Really? Does the other person ever just roll over themselves and go “Oh, yeah, I was wrong” ?

Maybe sometimes, depending on how it’s handled. But typically, all that “evil for evil” does is leave the two parties hating each other, and everyone else gets to deal with it. Workplaces, churches, and families across the world are infected with this stuff. Nobody’s ever proven right; nobody’s vindicated; instead, resentment festers, and the whole environment is left feeling awkward, fragile, and, well…

Do not be overcome by evil, but overcome evil with good. (Romans 12:21)

“You have heard that it was said, ‘Eye for eye, and tooth for tooth.’ But I tell you, do not resist an evil person. If anyone slaps you on the right cheek, turn to them the other cheek also. (Matthew 5:38-39)

Evil has something in common with cold: it is not a substance itself, but the absence of its opposite. Jesus does not treat interpersonal evil as an artillery bombardment, which you might combat in kind. Just as cold is the absence of heat, evil is the absence of good. Fight evil with evil and you might feel for a moment like you’ve defended yourself; but all you’ve really done is spread and metastasize evil. Living eye for an eye is the spiritual equivalent of responding to a freezing apartment by opening all the windows and turning up the AC. It’s as nuts as it sounds, yet we do it all the time.

Jesus isn’t telling us to avoid “evil for evil” just because it violates the Christian ideal (although it certainly does). He tells us to avoid it because it doesn’t work.

Of course, if we’re going to look to Jesus for a better way, we have to talk about the frustration of returning good for evil.

Because it is frustrating. I won’t insult you by pretending otherwise. To walk away from a gossiping friend with a beatific smile and let them have the last word? Let them win? Our heart rails at the injustice of it. We’re just antsing to correct the record. What if everyone believes them? What if I lose out on friends or standing or a test or a job because I didn’t defend myself?

It’s a fair question. What if?

Here is where we have to respect the Bible’s practicality. When Jesus gives advice, he is not walking about whispering Eastern mystic nothings that have no bearing in the real world. He knows all about the toxic dynamics of your high-rise office or taco stand; he knows exactly what people are saying about you in your dormitory. He gets it. It is we who are ignorant – ignorant that sometimes true wisdom works in a manner opposite to what we expect, that sometimes we have to lose in order to win.

For whoever wants to save their life will lose it, but whoever loses their life for me will find it. (Matthew 16:25)

This verse manifest itself  in so many everyday situations that it’s not even funny. It is a paradox. Much of what we do in our lives can be viewed as attempts to reach for life. Jesus is telling us to give it up. And it works. The only question is whether we will let go of the wheel and allow God’s ways to do their thing.

Here’s how this works in the real world – and forgive me if I’m stating the obvious, but I am stunned daily by how few people seem to know this. When you respond to wrath with a soft answer (Prov. 15:1), most people feel embarrassed and disarmed in response. They sense there’s no fight, and their conscience is pricked. Many will drop their assaults. Some will immediately apologize and try to make things right. Try it some time. It’s a far cry from the results of firing back, which usually just gets people putting their shields further up.

In “Victory Over the Darkness”, Neil T. Anderson described getting ripped a new one by a woman he knew, brandishing a whole list of iffy criticisms. His response? “It must have taken a lot of courage to come in and share that list with me. What do you suggest I do?” The woman broke down crying on the spot and set about making things right.

Here’s another advantage: when you watch someone fire back in response to criticism, do you not see that person as unstable, volatile? Do you not instinctively lose a little respect for that person? Conversely, the person who can offer good for evil, or at least walk away from a fight, is seen as the more respectable. This phenomenon is commonly called “adulting” and could spare us all a lot of grief. It defuses tensions, opens the door for mature tactics (like discussion in private, starting with the phrase “Have I done something to offend you?”), and generally shows that you’re secure in yourself.

That’s ultimately a great reason to combat evil with good: it forces you to confront where your bread is buttered. Is your worth in God, or are you dependent on your reputation? Someone who knows his or her own worth in Christ has no need to return human assaults.

Do you see how Jesus’ wisdom both works in real life and sanctifies us in the process? I dare you to find me another system of belief that does this. No matter how many skeptics say “We don’t need a 2,000-year-old book to tell us these things”, it would seem, from a quick glance around both our town and the world in general, that we do. Drama is everywhere and “love your enemies” is not amongst our society’s catchphrases. (If you listen to R&B, pay attention to how many of its lyrics talk about “showing up” your enemies.) When the chips are down, human instinct is to fight, to scramble, to reach for our own life. It isn’t working.

Let’s come in out of the cold. Overcome evil with good.

Do not repay evil with evil or insult with insult. On the contrary, repay evil with blessing, because to this you were called so that you may inherit a blessing. (1 Peter 3:9)

15 thoughts on “Why Evil for Evil Doesn’t Work”