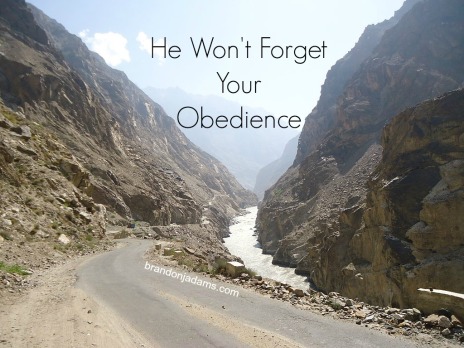 You’re confronted with a choice.

The wrong choice is obvious, but it looks better in the short term; you can see the reward.

The right choice is also obvious, but you don’t see any gain to it. All you can see down that road is losing out for the sake of being good. Being honest on your timecard when nobody would know either way; breaking up with that person who’s apathetic towards God; clamping down on that beer habit when it feels like the only thing keeping you going.

I’ve written along these lines before, but…how the church would change if we remembered that God promises rewards for obedience?

I should say this right away: the greatest reward of obedience is God himself. Tim Keller recently said it well: “Don’t obey God to get stuff. Obey God to get God.” More of his peace, his power, his unfettered presence. That is the best reward of all. And the fact that a small part of us groans and rolls our eyes in impatience at that statement just shows how little of God’s love we have truly tasted. If only we had experienced more of God, we would not hesitate to seek him above all else. We’d be hooked.

I’m so totally stealing my pastor’s encouragement from our morning “fella-ship” at Chick-Fil-A last week that it’s not even funny, but it was a great point: God remembers our obedience. For a long time.

People think the book of Numbers is part of that “boring” (but important) collection of genealogies and bodily-fluids-regulations in the New Testament. It’s not. Numbers is packed with potent, sobering stories of how Israel treated God after their dramatic exodus from Egypt following centuries of enslavement. (Spoiler alert: not well.)

You’d think that the newly liberated Israelites would be thrilled to arrive at the border of the promised land. I imagine they waited with anticipation while Moses sent twelve scouts, one from each tribe, to get the lay of the land and report back.

Instead of rah-rah, ten scouts threw a wet blanket.

They gave Moses this account: “We went into the land to which you sent us, and it does flow with milk and honey! Here is its fruit. But the people who live there are powerful, and the cities are fortified and very large. We even saw descendants of Anak there. The Amalekites live in the Negev; the Hittites, Jebusites and Amorites live in the hill country;and the Canaanites live near the sea and along the Jordan.”

Then Caleb silenced the people before Moses and said, “We should go up and take possession of the land, for we can certainly do it.” (Numbers 13:27-30)

There was nothing wrong with reporting inconvenient facts. Moses wanted facts, or he would have simply gone “the Lord is with us” and pushed across the Jordan without a whit of intel. Indeed, by gathering facts, Moses created an opportunity for God to be glorified; by pressing forward even against odds known to be overwhelming, Israel’s belief in their all-powerful God would be more convincing.

That’s what Caleb was thinking. Despite the grim reality of the task before them, Caleb, from the tribe of Judah (Jesus’ tribe, by the way), doesn’t think twice. He knows where Israel’s bread is buttered: not in spears and chariots, but God.

Fatally, the other scouts don’t see it that way.

But the men who had gone up with him said, “We can’t attack those people; they are stronger than we are.” And they spread among the Israelites a bad report about the land they had explored. They said, “The land we explored devours those living in it. All the people we saw there are of great size. We saw the Nephilim there (the descendants of Anak come from the Nephilim). We seemed like grasshoppers in our own eyes, and we looked the same to them.” (v. 31-33)

Unbelief often disguises itself as being practical, or “facing the facts”. But the scouts’ response to Caleb was no longer fact. Notice the progression. Suddenly, far from some of the Canaanites being giants, now all of them were giants (when did the Hittites, Jebusites and Amorites suddenly become eight feet tall?). The scouts were scared, and in order to validate their fear, they started exaggerating the obstacles. Also, simple facts gave way to sweeping opinion – “the land we explored devours those living in it”.

Instead of the opportunity to devour milk and honey, the scouts feared being devoured themselves. By Chapter 14, they had dragged all of Israel into their despair. Misery loves company and all that.

It was the final straw for God. Ironically, he brought their fantasies to pass – they were devoured, albeit by forty years of desert wanderings instead of the Canaanites. The ten unfaithful scouts didn’t even make it that far (14:37).

But two men from that generation were spared. God remembered the faith of Joshua and Caleb, and how they saw God when everyone else saw only Anakites. It was Joshua whom God selected to lead the new generation of Israel back to the promised land and to conquer it at last.

Fast forward 45 years, two books, and a successful conquest of Canaan. Caleb comes to Joshua and asks him for a favor.

“I was forty years old when Moses the servant of the Lord sent me from Kadesh Barnea to explore the land. And I brought him back a report according to my convictions, but my fellow Israelites who went up with me made the hearts of the people melt in fear. I, however, followed the Lord my God wholeheartedly. So on that day Moses swore to me, ‘The land on which your feet have walked will be your inheritance and that of your children forever, because you have followed the Lord my God wholeheartedly.’

“Now then, just as the Lord promised, he has kept me alive for forty-five years since the time he said this to Moses, while Israel moved about in the wilderness. So here I am today, eighty-five years old! I am still as strong today as the day Moses sent me out; I’m just as vigorous to go out to battle now as I was then. Now give me this hill country that the Lord promised me that day. You yourself heard then that the Anakites were there and their cities were large and fortified, but, the Lord helping me, I will drive them out just as he said.” (Joshua 14:7-12)

This is epic on multiple levels. Not only has God kept Caleb’s inheritance on ice for forty-five years, he’s kept Caleb himself spry with that old man strength the entire time. Also, we see that Caleb hasn’t forgotten the Anakites. He saw the same giant (haha) task the ten unfaithful scouts did. But his vantage point was different – and therefore, so was his destiny.

And he was so blunt in claiming his righteousness. “I, however, followed the Lord my God wholeheartedly.” I can’t quite imagine my pastors being so braggadocios before the throne. They’d be more like “well, I did my best, I was as flawed as anyone else and made my share of mistakes…” just like they say from the pulpit. Not Caleb. He walks forward, plunks down his receipt, and God grins and hands him Hebron. He takes his assigned land from the Anakites, teaches them Who is truly huge, and gets thousands of twenty-first century pastors to name their sons after him.

You and I don’t have any military campaigns to carry out, but consider this story:

A friend was faithfully giving 20 percent of his income to God, and suddenly his income dropped drastically. He knew he had to decide whether he should continue to give in a way that proved he trusted God. It wouldn’t have been wrong to lower his giving to 10 percent. But my friend chose instead to increase his giving to 30 percent, despite the income reduction.

You can probably guess how the story ends. God blessed his faith and gave him more than enough, more than he needed. My friend got to experience God’s provision firsthand.

It’s funny, Francis, because that’s not how I would have guessed the story ends. At least not a few years ago. But I, too, have come to see the connection between our obedience and God’s reward in my own life.

Some might object to me talking about God’s rewards. “Obey God because it’s right,” they’d say. And it is. He is worthy of our total surrender. But if God talks about rewards in Scripture, I think I am free to do so as well.

Others might warn me that the connection between obedience and reward is not airtight. This is also true. As my pastor preached last weekend, sometimes obedience leads you right into a storm. Jesus herded his disciples into a boat in Mark 4; the boat got hit by waves and nearly swamped. Jesus got up and silenced those atmospheric Anakites. Hot dog. But at the end of the book, his obedience to the Father led straight to his death on the cross. He was not spared the cup, and neither were most of his disciples.

Reward may be hard to come by on this earth.

But if we do not experience reward on this earth, we will surely experience it in heaven.

And Matthew 10:42 seems to suggest that God will be detailed, thorough, and startlingly generous in what he hands out for even the little things.

One reward I do believe he will offer even on this earth: himself. When we obey him, our relationship is renewed, our connection cleansed and restored, our souls refreshed by his presence.

I know it’s sometimes hard to care about that. We see in our minds all the earthly rewards we want, and God’s love feels like a distant consolation prize.

All I can say is: taste and see. Obey and see what happens.

If you’re facing a tough call today, or if you’ve been faithful for a while but have yet to feel all that rewarded, consider Caleb’s story. Even octogenarians might find themselves blessed over good deeds long since forgotten.

Isn’t that a hopeful thought?

“God is not unjust; he will not forget your work and the love you have shown him as you have helped his people and continue to help them.” (Hebrews 6:10)

21 thoughts on “He Won’t Forget Your Obedience”