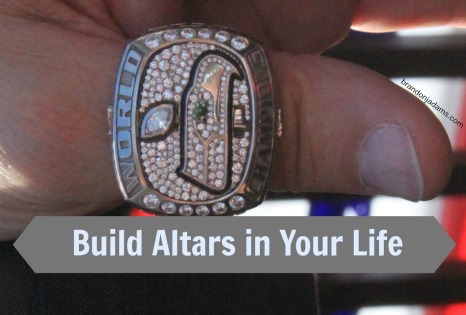 Ladies reading this…I apologize. But I must talk about football for a moment.

Two years ago, my Seattle Seahawks marched into New York City and practically waltzed away with their first Super Bowl win. My football team. Sports snobs will never get this. For a Seahawks fan who endured the 90s, having your team be the champ isn’t just amazing. It’s therapeutic. The NFL’s highest honor at long last.

And five months later, what were most Seahawks fans doing?

Dissecting the draft, analyzing our new free agents, wringing our hands over which star players were leaving…and worrying.

Worrying over whether we would repeat.

Are you kidding me? We fight for almost forty years to get to the big dance, finally climb out of the kiddie pool and shut up the peanut gallery, and we can’t even stop to just bask in the moment? For nine months, we’re the undisputed top dogs…and we have no confidence that we’re the real deal. I walked up to a guy in church wearing a Broncos hat, pointedly adjusted and fiddled with my Seahawks hat in front of him, and he chuckled and went “Yeah, everyone gets lucky once in a while.” That’s what we fear. We don’t want a fluke, a one-off. We want a dynasty.

But part of it is…we just forget. The glow fades and it’s back to prove-it territory.

We do this with God, too.

That blessing was it for a while. I won’t be getting much more.

I was blessed royally by God with a new job and a sweet lakeside apartment to rent, an unexpected treat from his good heart. It was the last-minute culmination of two years of prayer and waiting during which I had to fiercely battle a lot of doubt about God. He came through – with more than I’d asked or imagined!

Yet when the time came for new challenges, my mind didn’t seem to remember it. When it came to a new job, new car, more missions fundraising, it was right back to “Ugh, things are going south now.”

As if God’s storehouse has a limit.

I start rationalizing my worry. Jesus said we’d have trouble. Maybe I can’t be trusted with more. God isn’t a vending machine. It’s not about what we get but what we give God. And on and on.

Good spiritual truths in their own right. We don’t get everything.

But when I apply them before God even gets to weigh in, I’m doing what the enemy does: hijacking Scripture in the service of something evil. In this case, fear and unbelief.

My capacity for them rivals the desert through which the Israelites wandered. It rivals the Cleveland Browns’ playoff drought. (That’s dry.)

The world is truly a difficult pilgrimage, and it’s easy to resent God because of it. But let’s be honest: we don’t even pay attention to what he has done. When something good happens, it isn’t long before we either take it for granted or start waiting for the other shoe to drop. Usually both.

So a good friend tells me to build physical altars in my life to remember what God’s done for me, touchstones of faith for the next season. I’ve collected a few such mementos in my car, rolling around beneath the seats. Each one has a story.

There’s a small melted candle from my church’s New Years’ Eve service; I arrived late and didn’t get a candle, but my pastor found me and handed me a spare. The wax has long since melted, but the plastic stalk and cup still remind me that God finds me in my sheepishness and supplies what I need.

There’s also a dull yellow glowstick. During another service, my church handed out yellow and blue sticks, then told us to take one or both to indicate whether we were feeling joy, sorrow, or a mix. We then celebrated or encouraged each other accordingly. In an unintentional twist, the yellow sticks were longer. Jesus promises that joy will one day win. So I kept the yellow. (The sticks were great for lightsaber battles afterwards.)

My new apartment is a little expensive, but still nice. I’ll paint my key red. Not only will it reduce fumbling and searching on the stupid keyring, but it’ll serve as a nice, dominant-color flash of God’s generosity.

“But when you ask, you must believe and not doubt, because the one who doubts is like a wave of the sea, blown and tossed by the wind. That person should not expect to receive anything from the Lord. Such a person is double-minded and unstable in all they do.” (James 1:6-8)

James is echoing a principle that pervades the book of Matthew: our faith shapes what we receive from God. Our view of him shapes our relationship with him. If I see him as stingy or coy, I shouldn’t be surprised if I don’t receive much. That’s how I’ve always operated. What have you done for me lately, God?

I don’t want that anymore. Next time might be different, but God won’t be. He gives us evidence of his power and love so that we can expect it confidently for the next challenge.