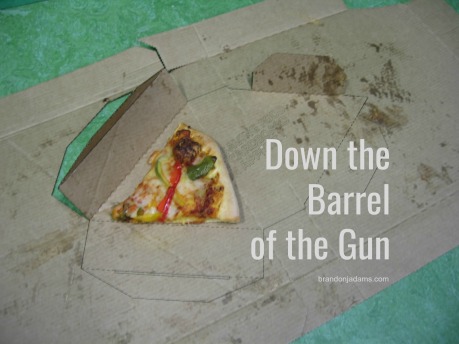 Every once in a while, on a pizza run, I’ll catch a glimpse of a future that worries me.

It’ll be some older male customer who’s living alone, in a tiny, isolated trailer way out on the edge of our delivery range, without a vehicle to his name. Some of these guys have a way of sharing a bit much about their lives, so I know they aren’t getting any visits from people. Just alone, filling their later years with television. Some of them by choice, some of them because of past choices.

I’ll just be real vulnerable for a second: that’s a future I’m afraid of.

I often worry about ending my life alone and broke, driving people away through advanced curmudgeonry. It sounds like overthinking, but my personality does tend that direction, and I worry about it a bit. I’m putting quite a bit of effort these days into avoiding that future.

Now, your typical response might be, don’t worry, Brandon. That won’t happen.

But maybe there’s an even better response.

I was inspired years ago by Steven Furtick’s testimony concerning his father’s last days. His father developed dementia and started exhibiting suicidal ideation. Steven started experiencing powerful fear that his father would take his own life due to a combination of the mental affliction and the medication attempts. He went to a counselor, expecting to be talked down from his cliff of worry. Instead, the counselor gave Steven what he called one of the greatest gifts he ever got:

“What if, Steven? What if he does take his own life?”

But Steven testified that by being invited to look straight down the barrel of the gun of his fears, he could see that God waited at the bottom. He would be there even if the worst happened.

That’s not a revelation you can get by just rationalizing your fears away (though that’s still a healthy thing). A lot of our effort goes into frantically arranging to dodge our worst fears, both in our lives and in our imaginations. But Steven shared that his fears lost their power over him when he claimed God’s persevering presence over even the worst case scenario. It wasn’t about a promise that God would avert it; it was about the promise that God would be his strength even in that darkness.

This is one of the most intense things I’ve ever done. I’ve looked my worst fears in the face. It’s unsettling, like taking that nervousness that comes from getting on a roller coaster and applying it to your stomach for hours on end. I don’t always do it. But sometimes, to repel the enemy’s attempts to scare me with the future, and perhaps just to reassure myself that I’m not making my well-being dependent on any earthly outcomes, I’ll look them in the face.

The spiritual benefits are worth it. You realize that God has, indeed, promised to be there no matter what, that despair need not rule your life if the worst does come true. And by looking repeatedly, you layer on that assurance.

May we all experience God’s blessings later in life – but praise him that he has secured our souls in peace.

This is part of a Pizza Lessons series I’m auto-posting while on mission in the Czech Republic. I won’t be responding to comments until I return, but please feel free to comment anyway.

14 thoughts on “Pizza Lessons #5: Down the Barrel of the Gun”