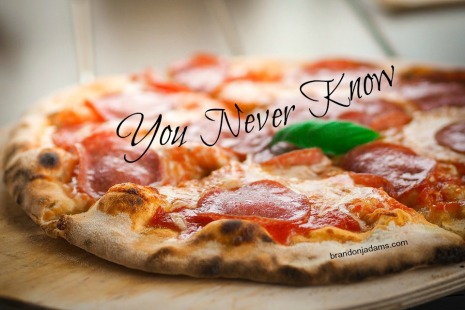 One of the fun parts of my second job (pizza delivery) is that you never know where the good tips will come from.

Our dispatch system works on a rotating basis. The next driver up “clocks out” on the oldest run available once it’s ready, plus a second run (a “double”) if it’s in the same area and if it won’t be too long a wait for the second order’s items to be ready themselves.

Most of the time, we have no way of knowing how much a customer plans to tip when we clock out on that run. Even with the online credit card orders in which the customer has pre-loaded a tip when they first order, the dispatch system doesn’t show it, and digging deeper into our system to view the tip would be impractical given all the other stuff we’re scrambling to do. One could do it, but so far, the honor system has worked for us. Even when we recognize an address and know they tip poorly, we take the run for the sake of avoiding workplace drama.

In this way, pizza delivery is almost a form of morally acceptable gambling! It’s a lot of fun. You don’t know whether each “pull of the lever” will stiff you or bequeath a ten-dollar jackpot of a tip, but since you’re putting in work and earning a wage regardless, it’s hardly sinful. (I know – that’s because it’s technically not gambling at all. But you get the same slight rush.)

Nevertheless, occasionally we get a driver who tries to game the system.

Said gaming usually takes the form of taking inappropriate doubles, i.e. two runs on opposite sides of town. Such doubles leave the second customer waiting longer for his food.

But the funny thing is, it doesn’t always pay anyway. You never know where the sequence of events is going to lead you.

I’ve worked this job long enough to know that sometimes you can take a legit double to an upscale neighborhood and both will stiff you, while a run to a trailer court might yield six dollars.

Sometimes I’ll get stiffed twice in a row and be left grumbling, but it puts me on the path to a fifteen-dollar tip at the local Hilton.

Sometimes I’ll take five or six single runs in a row and make almost nothing out of them, only to get back-to-back-to-back five dollar tips the following hour.

The other day a coworker “stole” a double I was expecting. The only result was that I got a double afterwards that he would have gotten otherwise.

Another time I delivered to what was clearly a girls’ softball team party in a local subdivision. It was a somewhat hefty order. No tip was forthcoming. I left trying hard not to think cheapskate. (In fact, I usually avoid counting money until after I’ve finished talking to the customer so that my smile is easier to maintain.) But it turned out that it was only a miscommunication between the hosts. An hour later, I came back to the store from a different run and my manager walked up to me saying, “Hey, you took the order to _________________ Avenue earlier, right? They just came in and added a tip.” Nine dollars.

There’s no way to predict this stuff. So you might as well just stick to the system, instead of creating an environment where everyone feels the need to keep one eye on the dispatch board so no runs get “stolen”.

So why try and force it?

It’s a perfect microcosm of the fact that my welfare is out of my hands. God is in control. When hard times come, God accepts our groans, but at the same time, we never know what miracle, breakthrough, or glory they might produce later down the road.

So…once we’ve done our due diligence…why do anything else but trust?

This is part of a Pizza Lessons series I’m auto-posting while on mission in the Czech Republic. I won’t be responding to comments until I return, but please feel free to comment anyway. Please pray vigorously for our team!