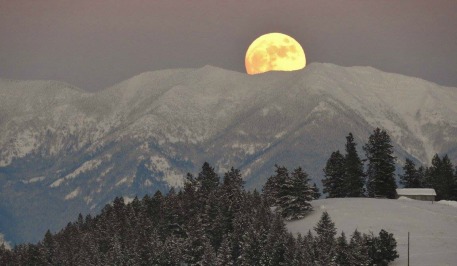 We’ve had a couple spectacular moonrises this last week, the enormous full orb majestically cresting the Swan Range, glowing against the cold, solid purple of the Earth’s shadow at twilight. My friends Mark and Cheryl were able to grab a camera and make a whole album out of it. (That is heroism, by the way – it was below zero temperatures that night. Again.)

No fussy, garish special effects extravaganza in today’s movies can give you chills quite like that simple sight, can it? Or like the conjunction of Venus and Jupiter that took place two Junes ago. Your mind knows that what it’s seeing is real, and you are awed – and humbled. Such is the power and artistry of God.

I had a random thought, do what you will with it: The moon prevents our earthly existence from averaging 50% light, 50% darkness. Its “sneaking” the sun’s light back into the night via reflection means that the overall balance ends up tipped in light’s favor…kind of like the balance of good and evil being ultimately tipped in God’s favor.

“Nothing can be so evil as God is good,” wrote Stephen Charnock. That idea stuck with me when I read it years ago. Some unconsciously believe that evil and good are opposite but equal. Cancelling each other out, neither ever quite going away (lest the movie have no sequel). But Scripture says God has won the battle, is winning the battle, and will ultimately triumph entirely.

Indeed, in the wintertime with snow covering the landscape, the moon is bright enough that you could drive at midnight without headlights (though I do not recommend it, or accept liability for what happens if you do). A fascinating parallel to the way God can be greatest and closest at the darkest solstice of our own lives.

Some darkness must come today. There will remain a groaning “as we wait eagerly for our adoption as sons, the redemption of our bodies” (Romans 8:23).

But one day, it will be defeated. Every tear wiped away. The day is not so far off now. God’s final victory is rising.

In the meantime, God has given me a heckuva universe to watch. I sit slackjawed like a geeked-out kid before his cosmic theater.